I’ve already written 2 posts in the last couple of weeks about my Jewish identity and Israel although I’ve really only skimmed the surface about how I am feeling about the current situation in Israel and, quite frankly, around the world. I’ve struggled with whether to write more about it and whether I should just present facts instead of including feelings. The truth is that I am scared and pretty horrified with all the anti-Semitism creeping up around the globe. It was always there…it had to have been for it to rise up so easily in people.

Throughout my 30+ years of life, I’ve seen the Israeli-Palestinian conflict boiling under the surface and then boil over only for it to go under the surface again (because it’s always there). I’ve seen news about suicide bombers in Israel. I’ve watched Clinton standing beside Arafat and Rabin asking them to shake hands knowing that this “peace” was only momentary. I slept in a bomb shelter when in Israel 19 years ago because the sirens had gone off where we were staying. I worried about my younger brother when he went to Israel as rockets rained down on northern Israel.

What’s happening right now feels different. Perhaps it’s social media that makes one more hyper aware of what is going on. My newsfeed continues to be filled with people’s own thoughts of what is happening in Israel and Gaza, with news clips of people speaking for or against Israel, and updates on people who even amongst the turmoil continue to make Aliya.

But I think it’s definitely more than just social media. There’s definitely a large part of this whole pro-Israel and pro-Palestine that is more about religion than any fight over land. This isn’t about Israel wanting to occupy or conquer Gaza. This isn’t really about the Palestinians wanting their own country. It is about Hamas, who proclaims in its charter that one of its goals is to kill all the Jews.

What happened in Paris earlier this week is extremely frightening. If these people are protesting Israel’s invasion of Gaza or rallying for Palestine, they shouldn’t be attacking French Jews in their synagogue. This was an act of anti-Semitism, plain and simple.

Hamas wants us to be an extinct race in the same way that Hitler did. If that’s not anti-Semitism then I don’t know what is. And as a people, we cannot sit back and just let that happen because of bad PR.

I normally don’t agree with Bill Maher, but he has been very eloquently speaking to what has been going on in Israel and Gaza. Here’s a quote of his that is actually from a few years ago. 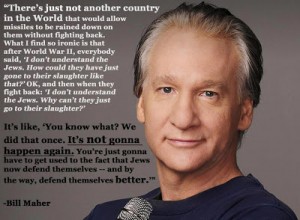 Reading the quote for the first time brought chills down my spine. It speaks to how I feel right now.
People have a tendency to root for the underdog and, in this case, they believe that underdog is Hamas. The reality is that Israel doesn’t have to apologize for the fact that it built the armed forces and military equipment to protect itself and its citizens. The reason that there are far less casualties on the Israeli side is because of the Iron Dome, not because Hamas isn’t attacking. However, the more other countries around the world speak against Israel’s actions and completely ignore Hamas’, the more events like those in Paris will happen.

There are things people are doing like raising money or supplies to send to IDF soldiers, as well as rallies being held in different cities. I keep looking within myself to see what else I can do and I think it’s continuing to speak up about the topic, continuing to share and like posts on Facebook that highlight what is happening, so that all my friends, no matter the religion, can be exposed to information that they might not be getting elsewhere. We’re not in a day and age where people can pretend not to know what’s happening like in the 1930’s. I’m not going to go silent and I know plenty of people who aren’t going to either.

One thought on “I’m not going Silent”