This morning as I took the girls for a walk, I realized that this is the most I have felt like my normal self since they were born. It could have been the cool (for Miami) breeze that made me feel like something had shifted, but the reality is that I have been a bundle of nerves and anxiety for weeks. I don’t even think I realized how much it was affecting me.

When the girls were first born, I kept hearing from people how amazing it was that I was so relaxed. I didn’t know how else to be, but I also knew that I wasn’t as relaxed as I guess it outwardly appeared. As the weeks went by, however, I got more and more anxious and I’m sure it showed. Some of it was just related to being a new mom and navigating all this newness, as well as the added immense responsibilities that comes with it. A lot of it was due to the baby nurse I hired. It’s hard not to feel like you are inadequate or don’t know how to do things when there is someone wanting to do everything differently than you planned. Maybe I don’t know what is best for my children, is what I kept asking myself.

As time went on, I couldn’t stand her. I knew that it was going to be hard for me with whoever it was because I am used to living alone, but this was on a whole other level. I did not feel comfortable in my own home and that sucked. Even though her 3-4 hour naps in the afternoons bothered me, it was also a time when I didn’t have to deal with her.

I was paying her to do a job and she was taking tons of breaks, while I was waking her up at night because she couldn’t hear the girls crying when it was time to feed. One more funny instance not having to do with the girls was when I asked if she needed anything when I went to do errands. Her initial response was, “You know my grocery list.” Then she added that the mangoes that I bought the last time were no good. What?! Like I have control over that? All I could do was laugh and tell her that it was no longer mango season.

Once my issues steered more towards how she was taking care of my girls and how she was a roadblock to me sleep training them, I knew it was time to look for someone else. What I was not expecting was her to walk out in the middle of the night after an argument.

The thing is that the next day I already felt better without her. Fortunately, my mom had already been putting out feelers, so I was actually already able to replace her and it has been a complete shift. Not only do I feel better, but I can see that so do my girls. While Elena still has some fits, her screaming is down several notches. She was probably reacting to my anxiety or to the bad energy that was in the house. I could immediately see her take to the new nanny and both of them are calmer and at peace. 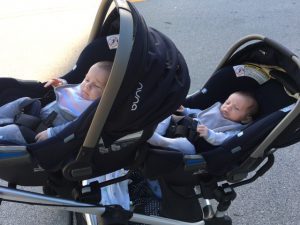 Here is a picture of our morning walk. It’s part of our new routine and phase 1 in our sleep training. I am loving it as some time alone with them outdoors!